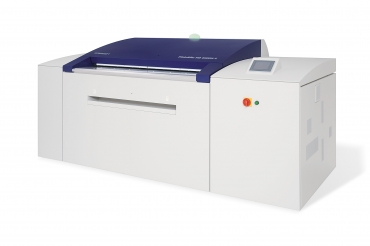 Kyoto, Japan – SCREEN Graphic and Precision Solutions Co., Ltd. (SCREEN GP) will show its new PlateRite HD 8900N series at drupa 2016 (Dusseldorf, May 31 – June 10). These eight-page platesetters promise class-leading productivity for thermal computer-to-plate (CtP) production and will be released to the global market after the show.

Over the last few years, offset printing has been increasingly expected to handle a wider range of small volume jobs with shorter turnaround times. This has created a growing need for CtP systems to deliver higher productivity and output than ever before.  In response to this requirement, SCREEN GP has developed its new PlateRite HD 8900N lineup. The range builds on the exceptional productivity, quality and performance offered by SCREEN GP’s flagship PlateRite HD 8900 series, which has itself been repeatedly upgraded since its launch in 2011.

The new lineup includes the Z, S and E models, with each type designed to meet specific needs. The high-end Z model features a 1,024 channel imaging head that helps it to improve output from 67 to 70 plates per hour. The S and E models are equipped with 512 channel imaging heads and are capable of producing 48 and 36 plates per hour, respectively. For the S model, this represents an increase of more than 10 percent compared to the current throughput.

The series also accommodates a wide variety of plate sizes, ranging from 304 x 305 mm up to a maximum 1,165 x 950 mm. The optional MA-L8900 and SA-L8900 autoloader feature automatic plate supply,*1 significantly improves efficiency and allows each model to operate continuously for extended periods.

Improvements enabled by the latest GLVTM imaging heads support output using SCREEN GP’s unique Spekta 2 hybrid screening as well as Randot X FM screening. The high-resolution S and E models also support ultrafine AM screening of up to 700 lpi, enabling the printing of fine art materials with outstanding quality. In addition, combining a resolution of 4,000 or 4,800 dpi *2 with step imaging mode *3 allows the output of 3D or other high-grade lenticular printing.

In terms of environmental impact, the Z model dramatically reduces energy consumption during operation by up to 43 percent3 per plate. This, and a variety of other features, considerably strengthen the series’ overall environmental friendliness. SCREEN GP anticipates the release of the new PlateRite HD 8900N series will make an important contribution to the continuing growth of the printing industry.

notes
*1. The MA-L8900 is able to set up to 600 plates while the SA-L8900 has a capacity of 120 plates.
*2. Options may be required to enable these resolutions depending on the model.
*3. This may vary according to the usage environment. The figure shown is based on a comparison between the PlateRite HD 8900N-Z and PlateRite 8800N-ZX when an MA-L autoloader and built-in bridge were connected. Operation was performed at an ambient temperature of 25ºC with conditions including a resolution of 2,400 dpi and plate size of 1,030 by 800 mm.